The History of the Plaza Lights 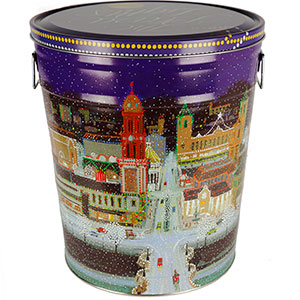 The Plaza Lights are a well-known visual display around Kansas City, MO. It’s made up of over 200,000 light bulbs and lines enough buildings to equate to 80 miles.

Each building is outlined with a string of lights making them appear even more distinctive. As soon as the lights come on, Kansas City knows that it’s time to begin the Christmas celebration.

This event takes place on Thanksgiving Day at 5pm. The Plaza Lighting ceremony gives families just enough time to see each other and enjoy the lights.

Whether you get a chance to see them turn on during the celebration or when you’re taking a walk through the Plaza district, it’s sure to be an enjoyable view.

The Country Club Plaza, often referred to as The Plaza, was created with the structural influence of architecture from Seville, Spain. The idea was that this would be a suburban shopping strip.

J.C. Nichols, the man who founded The Country Club Plaza, began acquiring the land in 1907. When the plan was first announced, it was nicknamed the “Nichols Folly”.

At the time, a very prominent architect named Edward Buehler was hired to design the new shopping district. Buehler had been an innovator in the Midwest who designed many high-end buildings.

Finally, The Plaza opened in 1923 with immediate success. The Plaza was comprised of high-end retail stores, restaurants, and entertainment venues.

Their success with this new establishment was for a number of reasons. The main reason being consumers were easily able to find parking and also shop in stores that had what they were attracted to.

The Country Club Plaza has had the longest life of any scheduled shopping center in the history of the world.

The Popcorn Tin Inspired by The Lights

Topsy’s Popcorn is a Kansas City-owned and operated shop that has been on The Plaza since 1967. Topsy’s has since expanded the business to other metro locations around the Kansas City area.

Topsy’s is a delicious gourmet popcorn brand that has savory flavors that include buttered popcorn, rich caramel, spicy cinnamon, tangy cheese, and Topsy’s decadent caramel with pecans or peanuts.

When you order a popcorn tin from Topsy’s, you have the option to select a tin that fits your size needs and flavor wants. Each tin has a design to fit any occasion.

The most popular tin during the holiday season is the Plaza Lights. This tin features a full-color display of the lights, falling snow, and the glow of Christmas.

The design is taken from an overview of the city and even features small cars plowing through the snowy streets. This popcorn tin comes with three flavors of your choice and can be resealed to maintain the popcorn’s freshness.