The Chiefs might not be going this year, but you can still celebrate Kansas City with Topsy’s super bowl popcorn.

Our massive popcorn tins can easily feed your team. A few tricks can turn Topsy’s popcorn into a flag for your team.

Yes, the traditional name for this is “Zebra Stripe.” But this wouldn’t be the first time the rules are bent at the Super Bowl. 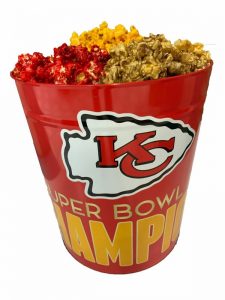 M&M and popcorn pair as well at the Super Bowl as they do at the movie theater. Show support for the Rams in the easiest way possible.

Because you know that they’ll earn the crown next year.