What is the Origin of Popcorn?

January 19 is the National Popcorn Day. Perhaps the oldest snack on the planet, popcorn has been enjoyed across the world for centuries now. And in fact, it might have been on the table on the very first Thanksgiving meal.

The Invention of Popcorn

Popcorn was not really “invented” by man; however, there’s evidence of the tasty snack throughout the Americas’ history. The oldest evidence was discovered in 1948 by Earle Smith and Herbert Dick in a dry cave called the “bat cave.” In the early discovery, several popped kernels dated a few hundred years old.

Before the invention of the first popcorn machine in 1885, people would prepare popcorn snacks over an open fire or on a stove. And these methods were not always successful as you can imagine. During these early times, people mixed this snack with milk and sugar as a breakfast cereal, and some colonialists would even add a small amount of molasses to create a snack similar to today’s kettle corn.

Things changed drastically after Charles Cretors invented the first commercial popcorn machine, increasing the opportunity for the large-scale production of popcorn. And popcorn machines started showing up in most movie theatres; this is how it came to be associated with movies, as it was a cheap, delicious snack.

The invention of the TV set also made the snack more popular, as people would make popcorn for their favorite TV shows at home.

Unlike other kinds of corn, popcorn has a higher starch content that pops out under heat and pressure into the white fluffiness you see. The hard outer shell keeps the starch and moisture inside, making it tasty and crunchier than the traditional sweet corn.

Regular and gourmet popcorn is not the same. Regular popcorn is popped using oil, salt, or sugar and then heated at around 150 degrees Celsius. As the water inside the kernels rapidly heats up, the steam bursts open this outer shell.

Gourmet corn, on the other hand, incorporates a range of tasty flavors ranging from sweet (buttered with cheese or caramel) to spicy (cinnamon). Flavor innovation is at the center of gourmet popcorn, which is a popular snack across the world.

The manufacturing process of Gourmet Popcorn results in a higher quality product that is tastier than Regular Popcorn. And some flavors may require hand finishing for the best quality of output.

Topsy’s Magic in Every Bite 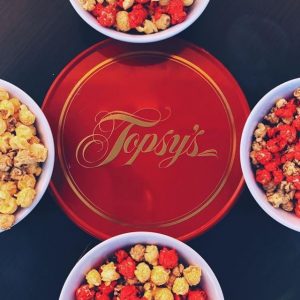 Topsy’s has been around Kansas City for over 60 years, serving gourmet popcorn for every occasion. Our range of savory flavors includes rich caramel, spicy cinnamon, and tangy cheese popcorn. And we also sell custom decorative gift tins to help you to keep your Popcorn snack fresh and crunchy for longer.

Topsy’s online shop delivers deliciously flavored popcorn all around the world! If you reside in the Kansas City area, pass by any of our popcorn and ice cream outlets and order your tasty treat today. Or you can order online for a taste of magic in every bite.