What are the benefits of ground cinnamon (besides being the center of a ton of delicious recipes?)

Studies have proven numerous health benefits of cinnamon. So next time you take a bite of Topsy’s cinnamon popcorn, know that it’s good for your body (and soul).

Researchers have discovered that minerals make cinnamon anti-inflammatory. Cinnamon’s ability to lower glucose levels and blood sugar makes it an effective fighter against the side effects of diabetes. This has the bonus effect of reducing redness and boosting skin appearance.

Looking to cut down on sugar? Cinnamon’s sweetness makes it an ideal alternative to sugar in foods. Use it to amp up lattes, soups, and more.

The antibiotic properties in cinnamon give it armor to protect the body against bacteria. Cinnamon is often used to boost immunity and fight infections. 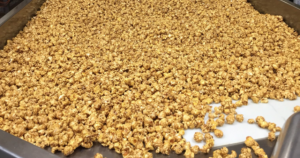 There are at least 41 compounds that boost the health benefits of cinnamon. It contains several antioxidants, including polyphenols and phenolic acids. These properties make cinnamon a great way to calm physical stress and the effects of chronic disease.

Want a simple way to reduce cholesterol and high blood pressure? Just add a pinch of cinnamon! Research shows that cinnamon is full of properties that help protect against heart disease.

Add a Pinch of Cinnamon to Your Popcorn

Get a dose of cinnamon with Topsy’s cinnamon popcorn!

Our popcorn tins are perfect to munch on in the middle of the day or to share in a meeting. Our cinnamon-flavored popcorn combines the kick of a chai latte and the crunch that makes popcorn an irresistible snack.

Visit our website to experience the benefits of ground cinnamon in the best way possible.