Popcorn tins are perfect to share with friends (or keep to yourself, we get it).

While we can’t give away all our secrets, we can tantalize your taste buds with a few kernels of knowledge. 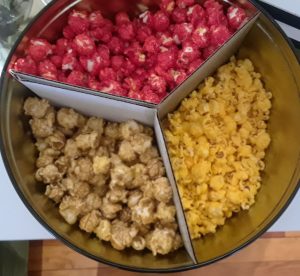 Popcorn tins are an American tradition! Louise Ruckheim popularized gourmet popcorn by adding peanuts and molasses to popcorn to create the cracker jack. It exploded in popularity thanks to its mention the classic “Take Me Out to the Ballgame”.

We’re not surprised this tradition endures. After all, who doesn’t love munching on Topsy’s caramel popcorn at a Royals game?

Popcorn can be found in times of hardship. Cheap popcorn tins were a popular snack in the Great Depression due to its low cost. In WWII, Americans consumed three times more popcorn than usual due to sugar shortages. 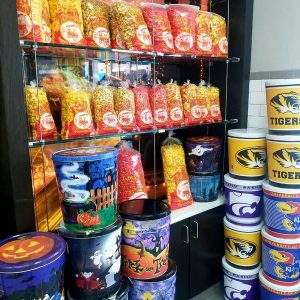 Holiday popcorn tins are always a hit that time of the year. What makes a better gift than cheese and cinnamon popcorn wrapped in a lovely tin?

Popcorn was enjoyed long before the invention of microwavable popcorn bags. Archaeological evidence from Peru shows that popcorn existed as early as 4700 BCE. The Aztecs used popcorn in ritual dance and jewelry. Flavored popcorn was invented by Indigenous Americans, who added chili and other spices to their popcorn.